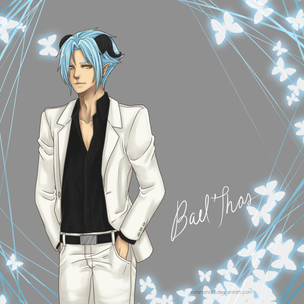 Name: Bael'Thas
Nickname(s): Bael, Bae
Age: Immortal, appears to be in his mid to late 20s
Gender: Male
Race: Demon
Height: 6'1"
Weight: 185lbs
Hair color: Light blue
Eye color: Goldenrod
Occupation: Owner of a nightclub
Physical appearance: When out in public, he keeps his demonic appearance to a minimum. He uses magic to hide his horns, sharp teeth, claws, ears and such. Around other magical creatures, he rocks around a more casual creature appearance, in which he doesn't cover his horns, teeth or ears (i.e. profile image). Bael's true form is his demonic form (N/A).
Hobbies:
Personality: Cool and sophisticated, slightly cocky; but quite the push-over when it comes to Serah telling him what to do.
Biography:
Love interest: Seraphita
Relationship with Seraphita: He's whipped, but he loves it.
Outfit Ideas: Bael likes to stay classy; if not always in some type of suit, with the very rare occasion. He at least always has some kind of dress shirt and slack combination.